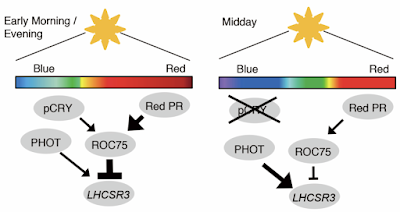 -Abstract-
Strong light intensity leads to harmful overexcitation of the photosystems in green algae. In Chlamydomonas reinhardtii, LHCSR3 is required for the rapid protective response known as energy-dependent quenching (qE). Because the majority of photoacclimation analysis has been conducted under controlled laboratory conditions, physiological responses to natural environmental changes such as light/dark cycles have not been examined in detail. Regarding fitness in higher plants and microalgae, light-dark cycles represent a major Zeitgeber for synchronizing the circadian clock to multiple physiological responses, yet there is little consensus with respect to the clock response to high-intensity light in photosynthetic organisms. In a previous study, 105 circadian rhythm insertional mutants were isolated as rhythm of chloroplast (roc) mutants. Here, we report our characterization of the roc75 mutant, which exhibited a significantly higher qE value and LHCSR3 protein accumulation when grown under red light. We performed transcript analysis of ROC75 in the pcry (plant-cryptochrome) and phot mutants and found that only the former accumulated lower levels of ROC75 mRNA, suggesting that the blue light photoreceptor pCRY positively regulates ROC75. However, the degradation of pCRY by high-light exposure contributes to prevent over-accumulation of ROC75, which in turn facilitates the PHOT mediated main activation pathway for LHCSR3. Furthermore, LHCSR3 mRNA exhibited a circadian rhythm, though its basal expression level in the roc75 mutant was higher than that in WT. We therefore conclude that ROC75 acts as an attenuator of the circadian clock to control LHCSR3 expression with blue and red light as stimuli for attenuation.